Deborah "Debbie" Thornberry (born sometime in Mid-May) is a typical 16-year-old girl who is Eliza and Donnie's older sister, interested in music and fashion and longs for the normal suburban life her parents' job deprives her of. Even though she ridicules Eliza, she truly does care for her as seen in "Operation Valentine". She commonly wears an orange camisole, a green flannel shirt, blue jeans (with holes deliberately torn in the knees as a 'grungy' fashion statement), dark purple lipstick, dark purple nail polish and brown boots.

In "The Wild Thornberrys Movie", Debbie learns Eliza's secret after Eliza reveals it to the poachers that were threatening to kill her if Eliza didn't tell them how she knew about their plan to kill a herd of elephants. Debbie is amazed that Eliza gave up her gift to save her life and promises to keep her secret -- but only under the belief that if she doesn't, she will be turned into a baboon.

It’s shown in "Chew If By Sea" that Debbie suffers from chronic seasickness.

﻿Debbie is a typical teenager; she likes boys, fashion and is home schooled along with Eliza. However, unlike most children her age, Debbie travels around the world with her parents, sister, adopted brother and a chimp. This often upsets her, since she greatly desires the creature comforts that most teens take for granted. It’s hard for Debbie to meet boys and date, almost impossible to get to the latest movies or pick up the new CDs she wants, and she's less than thrilled about the wonders of the wild that seem to enthrall the rest of her family. Although Debbie has quite a temper (and usually lets it out on everyone around her), she does love Eliza and Donnie and usually ends up rising to the occasion whenever she’s needed on one of her family's adventures.

In "Gift of Gab", Debbie wore a white shirt with denim overalls.

Debbie also appears in both The Wild Thornberrys Movie and Rugrats Go Wild!, in which she befriends Angelica. 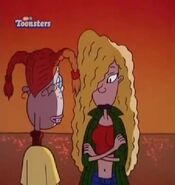 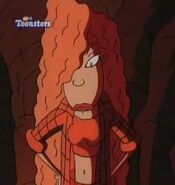 She wears also a red bikini swimsuit with yellow lines in "Hello, Dolphin!"

Add a photo to this gallery
Retrieved from "https://wildthornberrys.fandom.com/wiki/Deborah_Thornberry?oldid=10067"
Community content is available under CC-BY-SA unless otherwise noted.